CABERNET FRANC: THE NEXT BIG THING 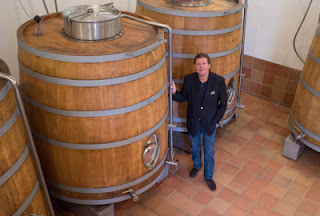 It has been misidentified, misunderstood and misused for years, but finally the ‘other Cabernet’ is set to take its place in the spotlight. Ian D’Agata charts its resurgence and, with three other experts, recommends 30 of the best examples from France, Italy, New Zealand and South America.

I LOVE CABERNET Franc. It’s a variety long overshadowed by Cabernet Sauvignon, but the best wines are far more aromatic and perfumed than their more famous relative, displaying raspberry, blackcurrant leaf, violet and cocoa notes, and showcasing a unique sultry sweetness and velvety mouthfeel. Unfortunately, for most of the 20th century, Cabernet Franc was anything but beguiling: the wines thin, tart, green and generally unexciting.

‘It took my vineyard manager six weeks to get the courage to tell me I’d bought a parcel with 80% Cabernet Franc: not exactly a hot grape in 1996!’ Jonathan Maltus

Depending on the vintage, Le Dôme is made with 80% to 85% Cabernet Franc – the highest percentage of any Bordeaux wine (Château Trottevieille’s Vieilles Vignes is 100% Cabernet Franc, but is not on sale to the public).

In 1990 its owner Jonathan Maltus arrived in Bordeaux in search of a new life from his petro-chemical industry days: ‘The Left Bank required buying huge hectarage and was unaffordable, but 5ha on the plains of St-Emilion was doable.’ But he soon realised that life as a winemaker was going to be tough with that plot. ‘The garagiste movement was just revving up. A few hectares next to Château Angélus became available and I took the plunge. That parcel is now Le Dôme, but buying it meant selling a house in Chelsea!’

Believe it or not, Maltus thought he was buying mostly Merlot vines – the required grape for making a garage wine in those days. ‘It took my vineyard manager six weeks to get the courage to tell me I’d bought a parcel with 80% Cabernet Franc: not exactly a hot grape in 1996!’ But Maltus figured if his neighbour Angélus was planted to 55% Cab Franc, he had landed something special anyway.

He chose Gilles Pauquet as his consultant oenologist, who holds the same post at Cheval Blanc – another estate where Cab Franc is king. ‘He helped us change our approach: in 2008, we moved from 100% new oak to 80%, started picking a bit earlier and taking the wine off the skins sooner. Viticulturally, we have moved to a slightly higher planting density – 8,333 vines per hectare rather than the 5,500/ha of the original vineyards.’

Le Dôme’s Cabernet Franc is mainly clone 326, but Maltus is looking to perform massal selections given his very old (planted in 1961) and surprisingly healthy vines. The old vines are grafted onto a rootstock called SO4, known to be a big producer, but are cropped low (four bunches to the vine) and are perfectly adapted to Le Dôme’s sandy soil and famous crasse de fer subsoil – an iron-rich stony clay. It’s a magical marriage.

Please follow this link to read the full article: http://www.maltus.com/#/teyssier-chateaux-teyssier-st-emillion-grand-cru-our-press